The Record on Review

So just what is the “record” on appeal? The record generally consists of (1) clerk’s papers, (2) hearing transcripts, and (3) exhibits.  The clerk’s papers are the trial court pleadings, such as the complaint, the answer, any dispositive motions (e.g., summary judgment), written orders or rulings, jury instructions, written opinions, a final judgment, and the notice of appeal.  Prudent attorneys will designate only those portions of the record necessary to review the issues on appeal.  Thus, before the record is ordered, the appellant should decide which issues will govern the appeal.

An inadequate record risks jeopardizing consideration of the appeal on the merits. Washington decisions abound where the appellate court refused to consider parts of the trial-court record cited in the briefs that were not properly designated on appeal.  The appellant bears the burden of creating a record adequate for review of the issues presented.  Conversely, the respondent bears the burden of designating those portions of the record that support the trial court’s decision.

New Evidence on Review. New evidence is rarely considered by the appellate court.  An appellate court will allow a party to submit new evidence on appeal when six conditions are met:  (1) additional proof of facts is needed to fairly resolve the issues on review; (2) the additional evidence would probably change the decision being reviewed; (3) it is equitable to excuse a party’s failure to present the evidence to the trial court; (4) the remedy available to a party through post-judgment motions in the trial court is inadequate or unnecessarily expensive; (5) the appellate court remedy of granting a new trial is inadequate or unnecessarily expensive; and (6) it would be inequitable to decide the case solely on the evidence already taken in the trial court.  All six factors must be met before an appellate court will even consider new evidence on appeal.

Carney Badley Spellman is about Advocacy, Strategy, Results. Located in Seattle, we are a full-service law firm committed to exceptional client service and professional excellence. Our firm serves individuals and businesses of all types and sizes. Also, our attorneys work with closely-held companies to Fortune 500 corporations in the Pacific Northwest and across the United States. Although Carney Badley Spellman‘s location is in Seattle, Washington, we are proud to be a part of the Washington state community and communities across the nation. 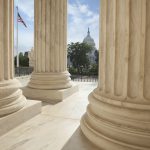